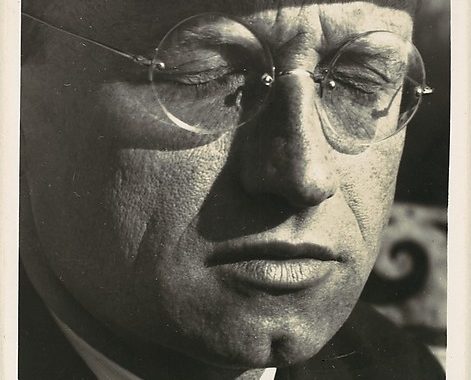 Sun on your face closes your eyes
and you are absent for awhile – white
beams brush your cheeks and chin,
blind and gentle blessing on your
empty brow. Is it

enough to pray this way,
naming nothing
under the ether of sky,
bringing open palms empty,
a delta of lifelines,
burden of years, new grass bent
by another morning’s due?

Once, amends were made;
questions torn at the sleeve, sewn up,
erased in seamless thread.
Rest. It’s early yet – just dawning.

I’m dedicating January to first drafts, as the season warrants.  From Psalm 90, I’ve taken the transliterated Hebrew phrase from verse 14, sabbeenu babboqer, or satisfy us in the morning, as the acrostic guide to a draft exploring what it means to be satisfied.  Lucia Moholy’s 1926 portrait of Franz Roh offered me a starting point.  Roh’s eyes are closed against the sun, which could read as resistance or as petition, meditation or mere emptiness.  The psalm itself laments mortality, the brevity and burdens of life, and ends with very direct bargaining, almost a challenge for God to satisfy, make amends from the Latin, do what is enough.  I’ve joined the notion of sufficiency with sunrise, and I’m pondering the blessings of emptiness in that quiet space before a day fills with sights and sounds of both joy and terror.  “Once” evokes a distant past when things were easier and made more sense; that may be as near as yesterday, but our need is still new each morning, in that dawn that is “just” in all its forms – exact, recent, simple, possible, and fair.

Draft a piece about a moment of satisfaction.  Strip it to its barest elements.  Use it to answer a question.