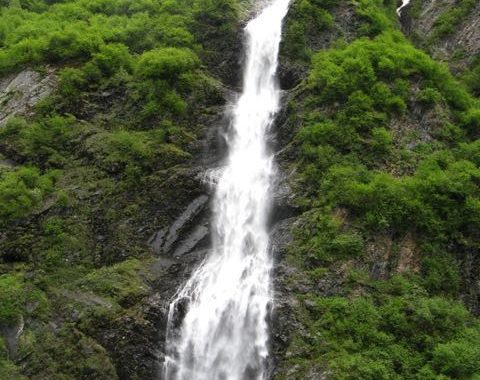 So why should it surprise me when,
after driving in silence for hours,

my husband knocks me back
in one quick gulp?

Here I sit, captive in the belly,
composing songs on the lining of his stomach.

I clang them on his xylophone of ribs.
(I am furious with his ribs.)

He inside his husk of solitude
(I am angry with this husk) is happy.

I have only my unruly brood of thoughts
for company, and they have found a stick

with which they poke his shriveled liver
like tending a sick flame.

From deep within, I hear a waterfall,
echo of myself, the way it empties

without fear of emptiness.
Perhaps he fears a flood.

I would hardly have capsized the car.
I would have let him keep his thunderbolt.

Instead, he disgorges me at the rest stop 300 miles north
where I totter in the sunlight, parched,
and wonder where we’ve been.

Road trips are trying.  They seem exciting at first, but past one hundred miles, they’re just a lot of hours in a car.  My husband is a quiet man.  He can go hundreds of minutes without speaking and feel utterly content, while that kind of silence swallows me whole.  I like the absurd extremity of Zeus swallowing Metis, goddess of wisdom and good counsel, out of his fear of her potentially powerful children.  Sometimes I imagine my mate desperate to stifle my own outpouring of creativity and counsel.  Sometimes his quiet just makes me mad.  (I imagine I share this with myriad wives.)  As a space-filler, I have had to learn he’s not angry when he’s mute, nor is he withholding all his deep thoughts from me.  Often, when we emerge into the sunlight, I discover I have imprisoned myself and he’s been totally oblivious to my captivity.  Darn it.

Where’s your prison?  Go there and write your way out.