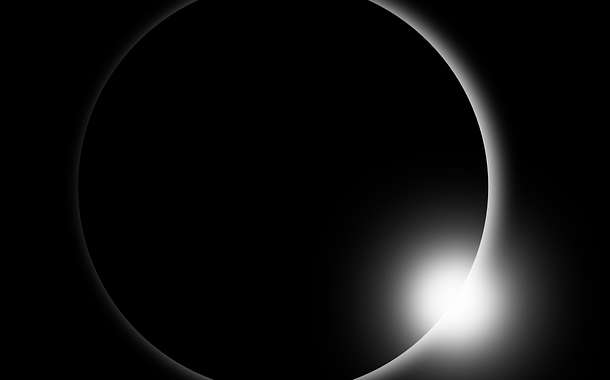 When she is three, she makes her choice: a skeleton
for a father. No one can convince her otherwise.

In her wisdom she turns him
to absence, the man who’s naught.

Her mother – a radiologist –
knows the eclipse: dancing

bones and empty grin
between the mirror and herself.

And so, when the child paints,
her sky is wider, less like a pot lid

settled on the box of house, people
in the windows thin as straw.

When she sings, her words are little planets
passing into careless shadow

cast by an opiate moon.
Her cuffs drop down, covering her hands.

In the absence of a parent, children invent.  A single friend’s daughter has chosen a father for herself – a skeleton – which I find fascinating as an utterly innocent symbol of emptiness.  My adopted friends voice that same sense, more conscious and complex, of a missing piece, a gap in identity.  The eclipse metaphor is the closest I can come to rendering that vacancy, some part of self obscured, but only by shadow, unoccupied space.  Here, I cast the result as a form of freedom, but also hiding.  We must, without a clear body, build ourselves some shelter for protection.  And her mother really is a radiologist.  How fitting for her daughter to be attuned to the outlines reflected back to her as she sends out quiet waves.

Write about your own eclipse.  What shadows do you enter?  What comes between you and your source, and how does that alter your vision?