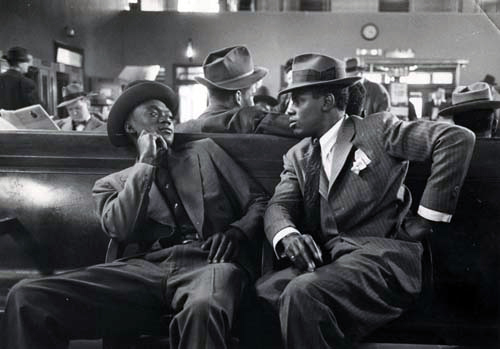 The station is full of men
in hats, pinstripe-serious,
pretending not to see
the angel with the camera.
Clock faces, solemn hands,
postures of business:
they are composed
as priests before the host.
Smoke hangs like incense, pregnant

pause: she startles
with a flash both urgent and divine,
a word that takes their voice away.
She leaves the image
of a man, the kernel
of a doubt, the wait,
the certainty of waiting.
Later, they will try to tell their wives
what silence means,

how to face the crowd without a tongue,
without a job to do, a God to represent.
But their wives already know –
speechless darkroom queens –
how gestation happens without light,
how words of man
don’t bring the world about,
the picture coming sharper, clear,
even as you are still.

This is the poem appearing today in my online advent collection, The Other Stars Hover & Wait.  It refers to the story of Zechariah in Luke 1:8-22. I’m using Esther Bubley’s photograph to explore the idea of men photographed, removed from the flow of time and work, progress and productivity. They become static objects of the gaze in a way that is less familiar to men than to women, perhaps more uncomfortable.  I use this image to consider why God took Zechariah’s voice after he questioned the angel about Elizabeth’s pregnancy. His voice was his work. As a priest, he spoke to and for God. I think Elizabeth must have understood waiting, not passively but silently, for God to act, perhaps in a way Zechariah, with his rituals and responsibilities in the temple, did not. Perhaps he learned some of that patience and stillness by bearing witness to a pregnancy he couldn’t interpret or influence with words. I don’t believe he was being punished for doubt, but was given the opportunity to step back from his own voice for a season to watch the joy the Lord would devise without his help.  I’ve invited Bubley to act as the angel Gabriel in this allegory to mirror the voice God gives women in His narrative. Elizabeth and Mary are the ones with voice in their pregnancies. I love the dignity God gives all people as full subjects, not objects.

Draft from an experience where words failed you.