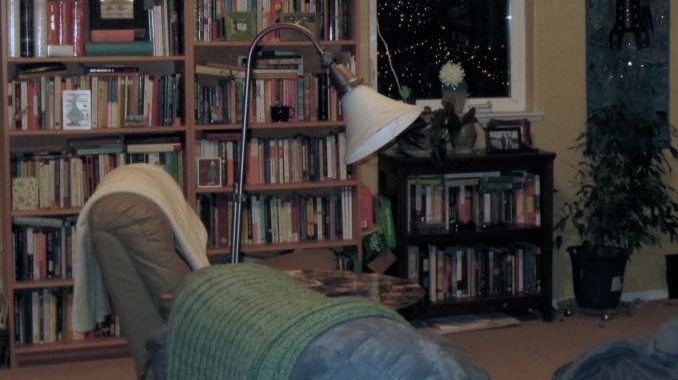 I like walking the house at night,
my husband asleep
beside my absent shape.
I would use the word secret,
but it makes him restless,
as though he were a child and I
used the word tomorrow;
as though he were dying
and I used the word
tomorrow.  I walk the house
I built before we married,
water plants I’ve tended longer
than our bed. The weeping fig
and I sift confidence.
I vow to write for morning,
for tomorrow, for the man
who will wake and rise,
walking the house alone
with coffee and windows
full of light, surveying trees
and telling birds his own eternal
mysteries, of which I am not
jealous.

Sometimes I don’t know how to occupy communal space.  In the summer, when my routine diverges from my mate’s, I find myself lingering in our empty rooms before I go to bed.  In a similar vein, I like offices after hours and shops after they’ve closed, when there is expanse and quiet to lay out the tangle of a day and smooth it into silence.  That solitude can make my husband anxious, and sometimes he calls out for me, checking in, softly asking without asking whether he’s a hindrance or a bother.  He is not.  I try to carry back the sense of things I find alone, but we all tuck into our small privacies for sustenance.  I don’t believe I’ll ever know how his secluded thoughts are patterned, nor can he guess at mine with much accuracy.  In the poem, I like the fact that night and day are separate spaces that bump up against a common margin.  Partnered people may be quite the the same – two islands holding hands.

Write about a word or notion you are fond of that sets up unspoken resistance in someone close to you.  Explore what the word offers you.  Consider how resistance shapes the interaction.