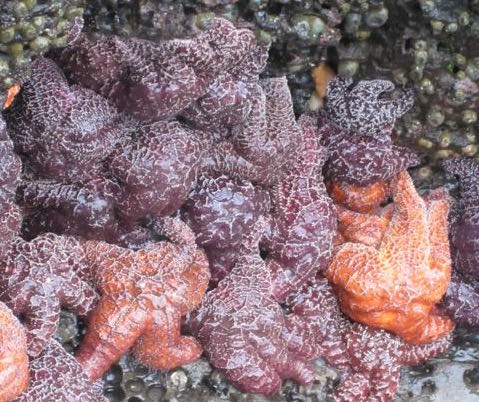 Sunday mornings, she would gather eggs,
slipping her hands beneath the white feathers,
biddies murmuring in prayer.

The warm globes felt like hers, the same way
the beauty of shadow on the wreckage of truck
did not surprise her, the same way

the knife had missed her toe –
of course it had – when her brother threw it.
Inside, the blade stood sentry

in the floorboard, witness
to all that she refused to lose.
She knew what she deserved:

salvation, not for good works, but purely
for faith that the world was lovely,
that it held things like starfish she had never seen,

but would, one day, so far from this Missouri dirt
that she would feel she’d lost a limb, remembering
that what we need grows back, casual as scattered seed.

I was driving to Homer with my mom and she recalled the beach covered in hundreds of starfish the last time she’d walked the spit. She found the bounty beautiful, but not surprising – those were her words: she “wasn’t surprised” because she didn’t know it wasn’t a daily occurrence. She didn’t know much about the tides and sea life, so she thought she was seeing something routine. Only when they weren’t there the next day, and when locals remarked on their rarity, was she struck with the miracle she’d witnessed. I was immediately struck by what her response revealed. Despite a childhood scarce in comforts, it never occurred to my mom to be surprised by beautiful things. She has always loved what is lovely, and felt it belonged to the routine of her experience. She hasn’t claimed it like a badge or worn it as a rebuke to her roots, but she has walked comfortably and casually into beauty as though it were her due, her natural habitat. The starfish memory confirmed something I’d known but hadn’t realized about her: she has never questioned her worth. Hence, beauty has never intimidated her.  It is business as usual.  In that grace, she, too, regenerates after disappointment, displacement, and loss.

Combine an image of danger or threat (the knife) with an image of beauty or wonder (the starfish) and explore how they challenge or complement each other.